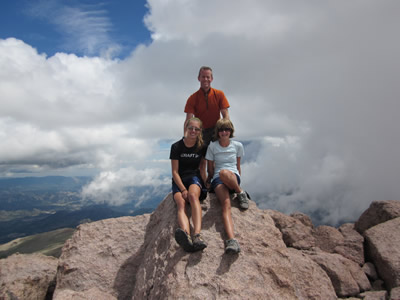 Fitness has done a lot for me throughout my life.  The reason I started as a personal trainer was to help others enjoy the benefits fitness can bring.  It goes well beyond losing a few pounds.  It’s about changing lives.  It’s about giving you the opportunity to experience life to its fullest.

My daughters, Rachael and Sara, and I spent five days in Colorado’s Rocky Mountain National Park this summer.  The highlight of the trip was a successful summit of Long’s Peak.  At 14,259 feet, Long’s is the highest point between it’s location in Northern Colorado and the Arctic Circle.  As one of the most coveted summits of Colorado’s 54 peaks over 14,000 feet, it has captivated me for 30 years.  From my first visit in 1981 I knew that someday I would stand on top.  The first opportunity came in 2004 with a successful attempt in winter conditions with my father.  My daughters, after hearing my stories of the mountain, chose to make it their goal too.

In January, we entered a contest through TRX Suspension Training to earn a sponsorship toward our goal of climbing the peak.  We created and posted a video to You Tube and garnered over 10,000 views to win the award.  Upon winning, my daughters leaped into action to organize the entire trip and train for a difficult attempt.  They planned the entire trip, including travel arrangements, car rental, hotel, campsite locations, and developing a gear list.  My role was to help them prepare physically and guide them to the summit.  They impressed me with their commitment to the goal.

The process leading up to the expedition and including the actual climb, taught them a lot about themselves and their capabilities.  It helped me see them not only as my kids, watching for their safety, but as capable and strong young women with the ability to do amazing things and persevere through adversity.  They came off the mountain feeling invincible, a feeling I know they’ll carry throughout the rest of their lives.

As we were returning from the summit, I began thinking of how fitness has made all of this possible for us.  Without it we would never have experienced the glow of the rising sun on the mountain’s East face, the breathtaking view of Glacier Gorge as we pass through the Keyhole, our route’s signature face, and the exhilaration of standing on the summit.  Most importantly, we had the endurance to make it back to our camp safely despite a sudden sleet storm.

You might not aspire to climb a mountain, but I’d bet that you’d like to live your life to its fullest.  It’s never too late to start.  We met people from ages 7 to 75 on the climb, some with the summit as their goal and others just planning to reach their own personal high point.

What can fitness do for you?