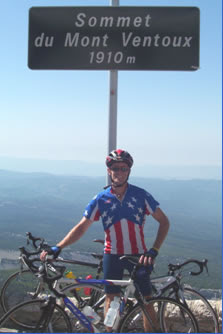 Two years ago, I had the opportunity to ride one of the most famous mountains in France, Mt. Ventoux. The Giant of Provence dominates the landscape in southeast France. It’s eerie top portion, referred to as the Moonscape, is nothing but white rocks. Nothing else. For riders in the Tour de France, it’s demoralizing because you can see the summit for the final 7km but you never seem to get there.

For me, it was anything but demoralizing. I felt incredible as I rode the 22km climb with an average incline of 7.7%, sometimes kicking up to over 11%. I rode the entire climb with a giant, stupid grin on my face because I could hardly believe I pedaling my bike up one of the most iconic climbs in cycling. It took 2:15 to get to the top. I spent almost an hour on the summit before making the ripping fast descent in 20 minutes to the town of Bedoin in the valley below. I trained hard leading up to the trip and it paid off.

The Ventoux will be used in this year’s Tour de France this Saturday, July 25. never before has a climb this large been featured this late, with the race’s final day coming on Sunday. With a massive climb like this on the penultimate day, there could be fireworks among the leaders.

Be sure to watch it on Versus