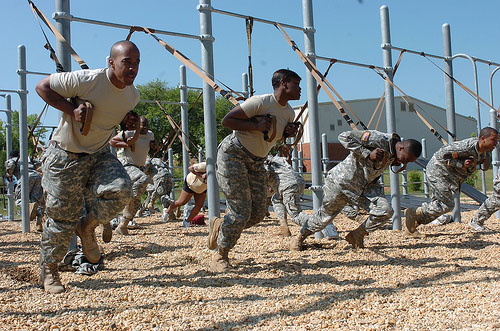 The US Army recently announced that it is testing a radical change to the fitness testing for soldiers.

The current testing involves a push up, sit up, and two-mile run test. While all three are great exercises, none simulates a situation that a soldier would find themselves in on the battlefield. They’re not lacing up the Nikes and going for a two mile jog. Instead, they’re wearing 60 pounds of body armor and other gear while carrying a rifle, ready to fire no less, while running through uneven and hostile terrain. That scenario requires you to be able to do more than a sit up.

In addition to adding agility tests to the “fitness readiness” portion of testing, a “combat readiness” test will also include a 400 meter run carrying a rifle through an obstacle course in full combat gear, and crawling and leaping over obstacles while aiming their rifle. Soldiers also run on a balance beam while carrying a 30-pound ammo box and do an agility sprint around a course of cones. Soldiers must drag a sled weighted with 180 pounds of sandbags to test pulling a fallen team member from the battlefield.

The US military has also been getting pretty progressive with the equipment they’re using the train soldiers. The military recently announced a purchase of 24,000 TRX Suspension Trainers for deployment to all branches of the service. Now each deploying brigade or battallion will have access to a TRX unit.

Functional fitness finally makes it to the US military! Is it time to look at what you’re doing as well? Think about what you do during the day and what you’d like to do from a recreation or sports standpoint. Are the exercises you do in any way supporting functional movement?

When it comes down to it, we exercise for a reason. For some it’s purely aesthetic and that’s OK. For most it’s about function. It’s about being able to do things with your body that you either can’t do today, or continue doing what you’re already able to do many years from now.