I try to keep this blog limited to content that you can use. Occasionally, when I come across a product that I use myself and believe in, I’ll let you know about it. I consider a product that can save your life one of those things you should know about.

For a couple of years now, I’ve ridden my bike wearing a Road ID. The concept behind this thing is really simple and the cost is very low. Basically, it’s an ID tag that can be used to identify you and provide emergency responders with contact information as well as allergy and other important info.

The Road ID is a lightweight neoprene band with an engraved tag that you wear either on your ankle or wrist. It’s lightweight, flexible, and I don’t even realize it’s there.

It’s not limited to bike riders either. Runners, walkers, and anyone who spends any time outdoors should have one.

Twenty bucks can save your life. Get your Road ID right here!

I’d like to let you in on a little known secret to make a huge impact on your flexibility and range of motion. It’s one of my favorites and it’s incredibly effective.

This technique is called self-myofascial release and it uses a foam roller. You can find these rollers at almost any place that sells fitness equipment.

The principle activated through this technique is called autogenic inhibition and in it’s simplest terms, it involves applying pressure to a tight muscle to signal to that muscle that it’s OK to relax.

Watch this video and then run out to get your own foam roller.

I was at my daughter Rachael’s track meet the other day (she ripped it up, by the way. She won the 100m hurdles, 100m dash, high jump, and her team obliterated the competition in the 4×100 relay).

Before the middle schools in the meet took the track, the high school team was still completing their practice. There was a group of 20 or so male athletes on the infield grass. They were going through a series of conditioning drills which included lunges, squats, reverse crunches, planks, and more. Their form was terrible and they really looked like they were just going through the motions, thinking about how fast they could get through the exercises and not focusing on quality and getting the benefit from the time they spent. Especially when the coach turned his back.

One exercise really caught my attention though. The worst push ups EVER! Bodies were flopping around, middles sagging, butts up in the air. One participant was pretty tall and from a distance looked like he had a bit of muscle on his frame and he probably had the poorest form of all. His arms were moving and his chest was coming up, but the rest of his body was staying on the ground. His waist and legs never left the ground the whole time. Imagine Gumby doing a push up, how’s that for a visual?

These are high school athletes?

A couple of lessons here:

1. Focus on quality. Don’t just blast through the workout to say you’re done. Think about your goal and how the workout is getting you a step closer. If your goal is to get it over with, blowing through the workout as quick as possible so you can get back to your cell phone and catch that all-important text message, then follow the high schoolers routine. If you really want to get stronger, do it right. It doesn’t take much longer. Everything else is just a waste of time.

2. Learn do exercise properly. Maybe they didn’t know they were doing it all wrong. Maybe nobody ever worked with them to show them how to get the most from the exercise. Maybe you’ve never had that help either. If you’re not sure if you’re getting the most from your workout program, ask for help.

If you want to know the right way to do a push up, here are a couple of examples that anyone can do! 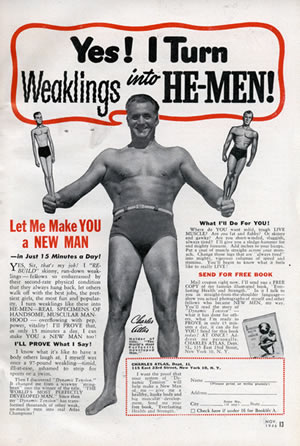 There’s a book that sweeping the business market lately and it’s called StrengthsFinder. The book is based on the theory that most people don’t have the opportunity to use their strengths at work each day. This is caused by many things, including not really knowing what you’re strongest at and a job that has you doing something you’re not good at doing. For example, outstanding salespeople are frequently recruited into sales management roles. The thought here is that if they know how to sell, they must know how to manage salespeople. Unfortunately, that’s not always the case.

The premise behind Strengths Finder is to determine your strengths and learn how to use them to your benefit and the benefit of your entire organization. As a team you each can then rely on one another to do what you’re strongest at and as a whole you’re better off. Great idea…in the right environment.

While this concept can be applied in business and in life, one area that this doesn’t translate to perfectly is your fitness. If you find the few things that you do best and do those things almost exclusively, you’re forgetting the rest of your body. What good is it if you can do bicep curls like nobody’s business, but you can’t make it up a flight of stairs without stopping for a breather?

When you’re dealing with your fitness, your body can’t rely on someone else to be effective at what you’re weakest at doing. (Imagine this one at home: “Hey honey, I’ll stay down here and do bicep curls all day and if I need something from upstairs you can go get it for me”). Your body has to work as a complete system and each muscle relies on the others to reach the goal. Rarely do you move only one joint of the body, so why should you focus all your training on single joint movements?

Keep developing your strengths, but pay particular attention to what you’re weak at doing and work on that too. Your body will thank you!