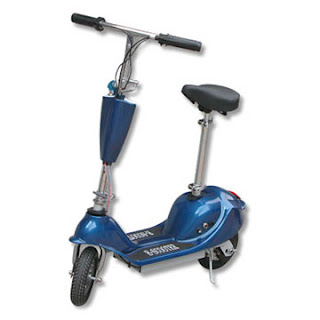 The 13 year old kid across the street used to be outside all the time riding his bike and attempting tricks on his skateboard. He hasn’t been out much lately. I saw him the other day and my first thought was “wow, he’s adding on some weight”. (Yes, Jeremy, I’m talking about you!)

I saw him again today and he was on a scooter. But here’s the problem: It was an electric scooter.

Something tells me the extra weight’s not a coincidence. It even has a seat so he doesn’t have to wear himself out by standing!

School’s almost out. Don’t let them sit behind the Wii and call it exercise. Send your kids outside this summer. Please.

If you need a few ideas for things to do outdoors with your kids, check out Chicago Wilderness

If you’ve wanted to try a 5k, or you’re just getting back into running after a long layoff, my new class might be just the thing for you.

Starting June 6, I’ll be leading a program to help you prepare for a 5k event. Whether you want to run, walk, or do a combination of both, this program will help you get ready.

In addition to group workouts, we’ll be bringing you up to speed on many different aspects of the running experience. Here are some of the topics we’ll be covering during the 10 week session:

This 10 week program is only $110 for residents and $132 for non-residents. Click here to learn more and register!

Got questions? Ask me and I’ll be glad to answer.

If you’re not doing the event, take a few minutes from your day to go over to the Bolingbrook Town Center, see the excitement and energy, and cheer on the participants as they raise money for the fight against cancer. Visit the Bolingbrook Relay for Life site.

If you can’t make it to today’s Relay, there’s another on June 5 at Neuqua Valley High School on June 5. If you’re not in this area, find a relay in your own area here.

The Ride of Silence (May 20, 2009) was created to honor cyclists who have been killed or injured on public roadways.

Learn more about the Ride of Silence and how you can participate FREE and hundreds of locations worldwide.

Bikes are vehicles too. I personally have been subjected to abuse and dangerous situations from people and their cars who feel that they alone have the right to the road. And, if you think someone putting on makeup or reading the paper is dangerous when you see them from your own driver’s seat, imagine the panic a cyclist feels when seeing that same bozo. 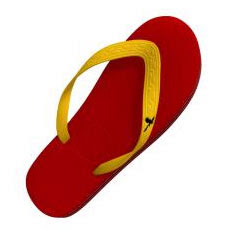 Summer’s coming and so is flip flop season. I have to admit, they drive me nuts. The shuffling, the flapping noise. The foot problems.

That’s right. Those flip flops that you love so much and are all the rage are causing problems. Just Google “flip flop foot pain” and you’ll come up with all sorts of articles.

Would you sleep every night on a mattress that’s less than 1″ thick? How would your back feel? Why subject your feet to the same torture? Think of the pounding that your feet endure every day, all day long. Show ’em some love and unless you’re at the beach, drop the flops.

Here’s a good article from WebMD.